Treatment of Child Malnutrition in Somalia

Bring Somalian children back to life

Project Peanut Butter (PPB) is partnering with the Dr. Hawa Abdi Foundation (DHAF). This project will allow PPB to provide Ready-to-Use Therapeutic Food (RUTF) to Dr. Abdi and her team in Somalia to treat 300 malnourished children.

Somalia has the worst under-5 mortality rate in the WORLD and many of these deaths can be directly attributed to malnutrition.

Dr. Abdi's camp has since grown into a shelter providing a multitude of services for up to 90,000 displaced people. Today about 30,000 people receive shelter, medical care, and other essential services in the DHAF camp that is centered around the original DHAF hospital which has now grown to over 500 beds.

An outpatient-feeding program based out of the camp was established in 2008. 60 health workers were trained how to properly assess and treat malnourished children using RUTF and 2 warehouses were built to keep stock of the food.

Malnourished Children at the DHAF Camp

Unfortunately, since 2010, there has been an inadequate supply of RUTF and the outpatient-feeding program has not been able to continue. The 60 trained health workers still live in the camp, but now do not have work. Now, children suffering from malnutrition are told to go to Mogadishu for treatment. A few are admitted as inpatients at the hospital at the camp, but the hospital does not have the capacity to treat all the malnourished patients as inpatients; there are a limited number of beds in the hospital and there is one nurse per 40 patients.

This project would allow PPB’s facility in Freetown, Sierra Leone to supply RUTF to Dr. Abdi and allow the outpatient feeing program to start again. 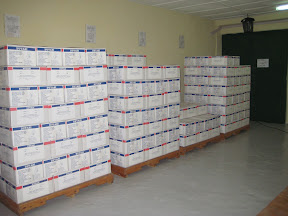 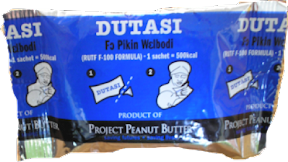 Treatment of Child Malnutrition in Somalia

Copy embed code Click the button above to copy the embed code for embedding this widget on your website or blog.